Learning About Voting System Through an Immigrant's Eye

Brandeis student Susan Le shares her experience visiting the Waltham Family School for her Immigrant Support Service Practicum (taught by Professor Marci McPhee):
The Waltham Family School integrates early childhood, adult education, and parenting activities in a family literacy program.  However, it is not just a place for learning English, but educating beyond the scopes of a classroom.  The women who participate in these classes have many goals for themselves and their children.  On my one volunteer visit, I had the pleasure of participating in learning about the voting systems in America alongside these women.
The day was supposed to consist of the usual transition from math to grammar, but the class I was volunteering in was visited by Marci McPhee, the professor for my Immigrant Support Service Practicum.  She had volunteered her day at the polls located at the school and offered to show the class around and teach them how they would vote.  So, we made our way from the classroom to the gym.
Here, we were met with several other volunteers as well as a police officer to the side.  The women were introduced to the ballot and the current candidates available for voting.  Many were unaware of the privacy voters were given as they made their way from station to station.  First, they must check their registration status and ensure that they indeed lived in the district.  Voters are separated into districts and you can only vote in designated voting areas within that distinct.  It turned out that a woman lived close enough to vote in the district we were in.  Everyone seemed highly interested as a map was pulled out and the women learned what areas they could go to vote.
However, like I mentioned earlier, most striking to these women was the privacy voters were given.  In fact, a woman in the class had never even voted in her life because her home country did not allow citizens to vote.  This kind of system was completely new to many of the women.  We were all participating in something new.  As they stood and learned about the polls and ballots in America, I learned the value of our system.  It may not be perfect, but it is definitely a move towards giving a voice to as many people as possible.  I think it is hard for some Americans to realize the opportunity to participate in choices that many others around the world do not.  By taking part in this practicum, your eyes are open to what these women strive for.  They want to learn as much as possible the opportunities available for themselves as well as their children.  Many of these women agreed that they hope to one day participate in an election because they want their opinions to be heard as some of these women take the steps towards learning English and gaining citizenship.
-Susan Le
Posted by ExCEL Brandeis at 1:25:00 PM No comments: 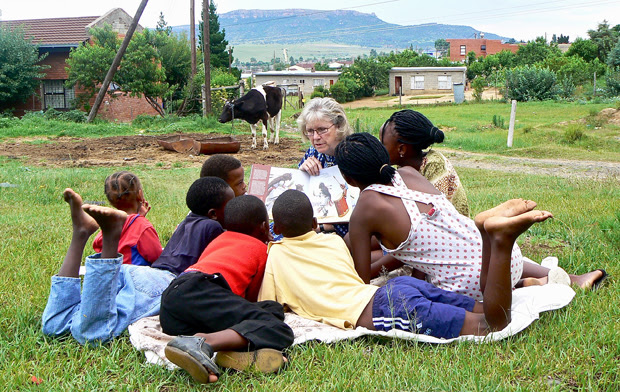 Read more here:
Changing the world, one children's book at a time | BrandeisNOW
Posted by ExCEL Brandeis at 2:57:00 PM No comments:

Robert Mesika, a senior majoring in Philosophy and minoring in Legal Studies, took Melissa Stimell's Advocacy for Policy Change course in the Spring of 2011. He described his experience as "by far the best and most engaging course [he has] taken in four years at Brandeis." During the semester, he was able to travel to the Massachusetts State House to lobby for tuberculosis related legislation and funding. He said that actively getting involved in the process you learn about in class "completely shifts your experience from monotonous memorization and lecture-based study to a far more enthralling and hands-on form of learning." He strongly recommends this course and experiential learning courses in general to his fellow students.

This kind of positive experience is not uncommon in experiential and community-engaged learning projects, and we hope to share many more personal stories with you soon!
Posted by ExCEL Brandeis at 4:51:00 PM No comments: